My rating is 3/5. Middle of the pack. But does that make it a masterpiece; I hear you ask?
Look, RE: Creators is a good anime. It is one of the most wholesome titles out there. You could watch it at your pace and feel satisfied. It starts, finishes and has a pretty decent ending…and no one is talking about it. Why?

Now you might have seen or heard about it because well, it aired in 2017 and that year had pretty strong titles keeping us occupied.

I mean, The Tale of Tanya the Evil, Castlevania, My Hero Academy, Attack on Titan and Made in Abyss probably made sure no one bothered to give it a second look at the time.

And if you’ve heard of it and still didn’t bother, I can understand why. It’s not Castlevania and it definitely isn’t My Hero Academy levels of exciting.
In fact, the first turn off for most viewers would be that it’s very conversation heavy and doesn’t focus too much on individuals and battles. It doesn’t dwell on single character long enough to make them the protagonist because there are so many main characters…

Now the story itself revolves around 16 year old Sota Mizushino, a high school boy with dreams of creating his very own manga title. He’s your typical main character and you probably will relate to him.

Sota loves manga and anime and plays video games too. You get to see and feel his deep love for them in episode 1 but that same love that brings the struggle and eventual villain of the title.

While watching the anime adaptation of his favorite light novel for inspiration, the pad he’s watching it on drags him into the anime’s world, where he sees a battle between two characters; the protagonist of the light novel Selesia and The Mysterious Girl in the Military uniform who sets things in motion for the other characters.

It’s established quickly that the mysterious girl knows Sota and that he has a deep dark secret that is the unintentional catalyst for the battle between characters who are referred to as Creations.

After returning with Selesia, Sōta discovers that other characters are from different stories and forms of media are being brought to the real world by the military uniform princess who is promising them less than she intends to give. 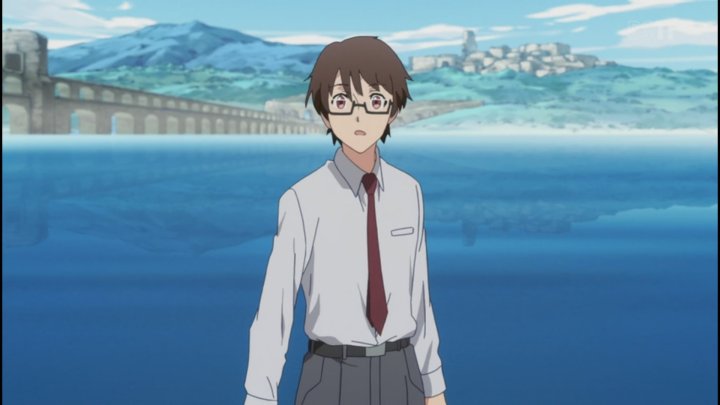 It’s established quickly that the mysterious girl knows Sota and that he has a deep dark secret that is the unintentional catalyst for the battle between characters who are referred to as Creations.

After returning with Selesia, Sōta discovers that other characters are from different stories and forms of media are being brought to the real world by the military uniform princess who is promising them less than she intends to give.
Imagine the fate stay series.

Now imagine instead of being heroes from lore and mythology the creations brought to the real world are characters from your favourite anime and video game titles who have to accept their world is made up since they’re now in the real world. Imagine they’re told that they can save their worlds if they force their Creators, those creators being the manga and anime artists and directors and designers who created them, to simply make things better.

That’s what this is. A SHOW about anime within an anime. But it’s lacking an oomf to it. After fourteen episodes of teasing one on one match ups you’ll have to deal with three episodes setting up the final act that’s nothing but exposition and world building.

The last five episodes .. well they left a lot wanting for me.
I’m not going to say a lot about this. It doesn’t give you everything you’ll want from an anime with it’s premise.

What it does is give a wholesome twenty two episode experience that kinda hits anyone who IS an otaku somewhere deep inside. It’s relatable, and manages to pack in enough action to make you excited then hits you with the feels that makes you want to stay even when the fighting stops. But then it ends.

It just ends and you feel nothing afterwards. You realize there was action but no body really had a fight that is worth remembering. I mean, Blade of Demon destruction had that one fight that blew up the anime internet community. And it took off from there.

My Hero Academy practically feeds us with fight scenes we can’t imagine forgetting. This title just has them fight, two or more characters die fighting for what they believe and that’s it. It won’t leave an impression.

Long story short, by my rating it did well enough to keep me entertained and it did well to begin, set up a world and power system that didn’t completely break because of different genres of characters existing in one world and properly explained how bad that was for the real world.

It finished almost all character arcs, well it did finish them but there was one arc I was disappointed in that I wish had more to it. Long story short I wanted to do a full review but after tens of drafting and redrafting I realized; you’re not missing much if you don’t watch it but you should. It’s kinda nice. But it’s mediocre kinda nice.